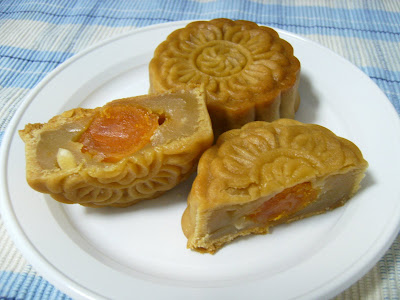 This is a continuation of my previous post. In my last post, i only show the exterior of the mooncake that i have make because it's not suitable for eating yet. 3 days later, i cutted the mooncake and took a quick snap of the interior before it was being wallop up. It's a pity that i brought ready make lotus paste and i found it too sweet. Perhaps, next time i should attempt to do the lotus paste myself or otherwise, should look for another supplier. According to my baking friend who bought my mooncake ingredients for me, there's another version of the lotus paste which is reduce sugar but it cost more and he's didn't get for me that since i didn't specifically said so. Reduce sugar means reduce raw material yet it cost more, why? haha, i guess that's when less is more and more is less. 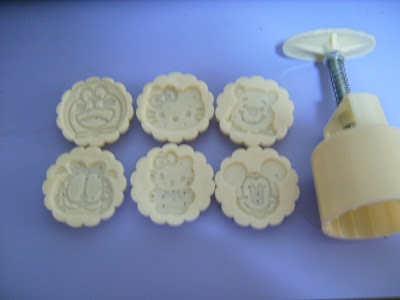 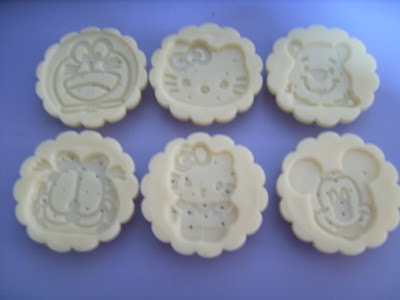 This is my newly acquire cartoon character mooncake mould. There's Doraemon, Garfied, Mickey Mouse (same design as my previous post one but i measured, it's actually slightly bigger), Winnie The Pooh, 2 Hello Kitty (1 head only and another full body) which is my favourite. Some one asked me, why i like Hello Kitty, my reply - because it would not argue with me as it doesn't have a mouth. Well, so does that means i don't like Doraemon? Well not, although Doraemon only got mouth but no ears, i still like it because there will be time when you only want to listen to someone talking instead of you talking, isn't it? Basically, at my age, i shouldn't be so crazy over this sort of things, but some how or the other, when come to this, i didn't seems to grow up and i still wake up early on saturday and sunday to watch the morning cartoon and children's program showed on local channel.

Back to my newly acquired mooncake mould. This didn't come easy. Another baking friend of mine from Malaysia have specially went to Kuala Lumpur to search for it. I just happened to over heard sifu mentioning, and i immediately requested for one set. When this baking friend reach the shop, there's not much balance - only 4 sets. She herself got 1 set, sifu 1 set, another of sifu's student 1 set and so kind of sifu to have reserve the last set for me. Inorder not to create any commotion (haha, as if we would fight over it), i rushed down to sifu's house 1st thing when the mould arrived. Every body was laughing why am i in such a hurry. Haha!
In order to test out the new mould, sifu have specially prepared 2 sets of pastry for testing out. 1 set is the traditional pastry and the other set is the chocolate pastry. 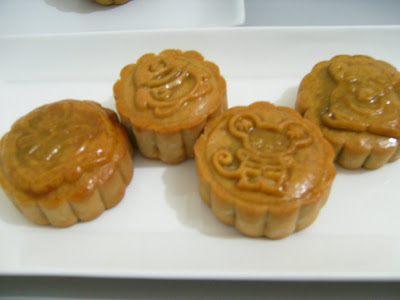 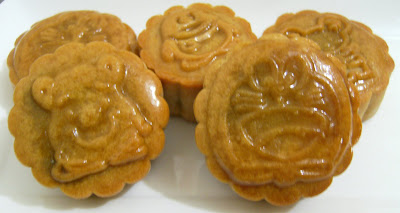 The above 2 picture is the traditional pastry with chocolate lotus paste fillings.
You may have noticed, there's 2 character which is not among my set of mould. Actually it belongs to someone else and we were too eager to check out how it look, so we tested out. These 2 does not belong to the 6 in 1 mould. It's 2 standalone separate one. My ealier Mickey Mouse one is also a standalone one. Now i have 2 mickey mouse. 1 among the 6 in 1 and another standalone. 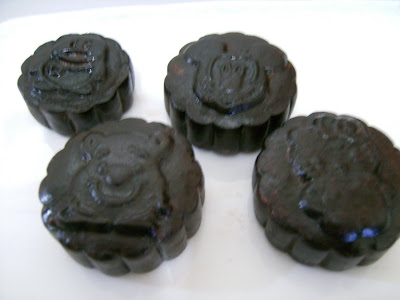 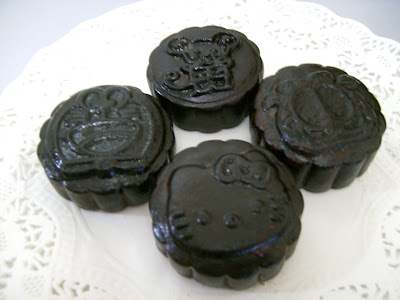 These 2 pictures is chocolate pastry with chocolate fillings. So rich that u would thought you are eating chocolate bar.
Surprisingly, it turn out that my camera captured the chocolate pastry one better than the traditional pastry one.
Originally i bought extra moooncake ingredients because i'm anticipating someone's present for this season. However........
I have not tested my new mould yet because i'm in no mood of making anything. My long awaited ........ is postpone again.
Posted by deli simplicity at 9:21 PM 11 comments: